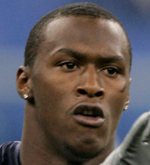 Buffalo Bills kick returner Leodis McKelvin was the goat in the Buffalo Bills' stunning collapse Monday night against the New England Patriots. His fumble of a kickoff set up the Patriots' game-winning score. Fans were understandably upset, but one (or more) took it way too far:

Bills players are concerned with their privacy and safety after the front lawn of a home belonging to cornerback Leodis McKelvin was vandalized following Buffalo's season-opening loss to New England.

Hamburg police on Tuesday confirmed the home of a Bills player was vandalized, but declined to release details of their investigation after an obscenity and the score of Monday night's game -- a 25-24 loss to the Patriots -- were painted in white on the player's lawn in suburban Buffalo.

"W/ all the safety issues n the NFL its not funny at all," Mitchell wrote. "We have Fam at our homes to protect. If u show ur face on my prop Ill make sure I do everythin to keep my Fam safe."

I don't blame Mitchell at all -- some fans take things way too seriously.