Who's atop the AFC?

Share All sharing options for: Who's atop the AFC?

Before the NFL season kicked off, four teams were collectively the prohibitive favorites to win the AFC. Since then, they have played a lackluster collective eight games. The Steelers barely beat the Titans then lost to the Bears; The Patriots got a miracle win against the Bills then looked out-of-sync on offense in a loss to the Jets; The Chargers needed a last-minute TD to beat the Raiders then lost to the Ravens; The Colts beat the Jags by 2 at home then needed yet another a friendly referee to beat the Dolphins (photo after the jump).

The two AFC teams that have looked the best so far: The New York Jets and Baltimore Ravens. Conventional wisdom on the Jets has said they can't possibly win with a rookie quarterback replacing the great Brett Favre, but they did what Favre couldn't do and did it against Tom Brady (not Matt Cassell). If the Ravens keep playing like they they have so far, they will quickly be the favorites to win the Super Bowl.

Unless a defender is now allowed to grab the receiver's jersey and grab him around the waist as he goes up with position to catch a ball in flight, this was textbook pass interference in the end zone as the referee watched closely from just a few yards away. 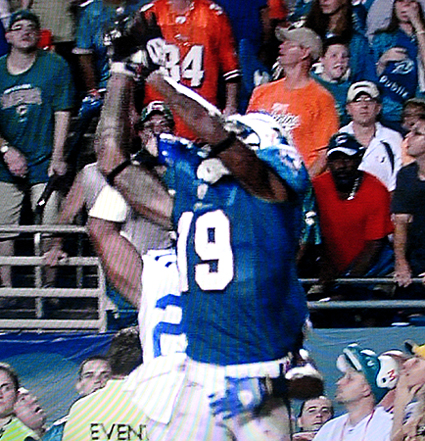