Colts pull one out of their butts

Share All sharing options for: Colts pull one out of their butts 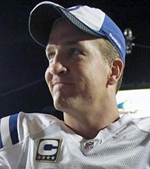 The Colts won because of the brilliance of QB Peyton Manning, who had all of 13 plays in the second half. Yet he used the limited time to run off a six-play, 79-yard drive and a four-play, 80-yard drive (that took 32 seconds) in the fourth quarter, both resulting in touchdowns. Miami, meanwhile, self-destructed when it counted.

On their next-to-last possession, the Dolphins strangely played for a field goal and a 23-20 lead instead of aggressively going for a first down and a game-ending score that would have left the Colts little time to respond; this was a team that was creative on offense all night, then got conservative at the wrong time. After Manning led the Colts to the go-ahead score (when the Dolphins stupidly played man coverage), the Dolphins then took 78 seconds to run off two plays and gain six yards prior to the two-minute warning; that's incompetence and Coach Tony Sprano admitted his team had the wrong personnel in.

This bungling of the clock and burning all three timeouts forced the Dolphins to do what they don't do well -- score quickly. They had two Hail Mary passes in the end zone; the first went off Ted Ginn's hands (on what would have been a tough catch) and the second was intercepted. Ball game over. So on a night where Miami had done everything right for the first 56 minutes, they did everything wrong in the final four. That's why the Colts are 2-0 and the Dolphins 0-2.

After two weeks, the NFL season is rocking. There have been six prime-time games, all coming down to the final seconds and the margin of victory has been 3, 6, 1, 4, 2 and 4. With no dominant team and emerging stars like Mark Sanchez, Matt Ryan and Joe Flacco, along with the likes of Manning and Adrian Peterson, it has the makings of a memorable year.