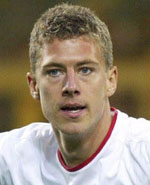 Imagine Shaq raising another team's basket two inches. Serena Williams somehow repainting the lines on her side so her opponent had a smaller area to hit to. An umpire shrinking and expanding the strike zone depending on which team is at bat. That's what Danish goalkeeper Kim Christensen did in a recent match for his Swedish team. And he says he's done it before:

I got the tip from a goalkeeping friend a few years ago, and since then I have done it from time to time," he told the Aftonbladet newspaper.

See the video evidence after the jump.