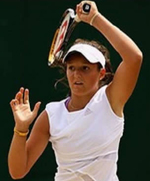 As usual, the U.S. Open's first round played out mostly by the chalk. Enter 17-year-old American Melanie Oudin, ranked No. 70 in the world, who ousted No. 4 Elena Dementieva, 5-7, 6-4, 6-3, in the second round Thursday in the biggest upset of this year's final Grand Slam. On the men's side, American Sam Querrey, seeded 22nd, is now 22-5 since the start of the summer and now faces No. 12 Robin Soderling in the third round. Soderling has never made it past the third round in Flushing Meadows; If Querrey can win that match, let the hype begin.