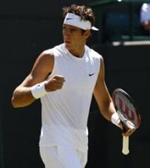 That wacky "guys'-guy" Brad Gilbert has done it again. The tennis legend-in-his-own-mind had this to say about Juan Martin Del Potro's seemingly masculine all-black outfit at the U.S. Open:

I'm giving a big thumbs-up to Del Potro's all-black gear. It looks physical, he's stepping up. They had him in too much of a fruity-looking outfit at the French and Wimbledon. Now he's looking like a physical specimen.

Maybe he just likes that the black is slimming on Del Potro. Of course, if he thinks you can't be "fruity" (as he calls it) and be a physical specimen, I'd like to introduce him to Esera Tuaolo and Ian Roberts.

Funny that a guy who could never get past a Grand Slam quarterfinal (his biggest career win was in Cincinnati; ooooooh, impressive!) would criticize somebody else, whether it's about their outfit or not. But I guess that's what "guys' guys" do.