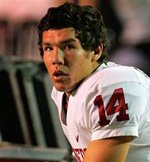 Well, that was sure a fun 2009 college football season for the Oklahoma Sooners. One and done. The Sooners, who eight months ago played for the BCS title, almost certainly saw any chance of a repeat visit vanish after losing to BYU, 14-13, in their opener, More importantly, they lost Heisman-winning quarterback Sam Bradford to a shoulder injury. Bradford sprained the AC joint in his throwing shoulder and early reports saw he will miss at least two to four weeks.

While it is possible for a team to survive one loss and win the BCS, I can't see Oklahoma going unbeaten the rest of the season with Bradford sidelines indefinitely. Their offense didn't look too hot against BYU when he was in there and their offensive line did a great imitation of a turnstile. On the bright side, at least we won't have to watch a Bob Stoops' team get manhandled in the BCS title game again; now all we need is for Ohio State to lose.

The rest of Week 1 was rather pedestrian, though I was rooting hard for Navy to shock Ohio State (they came close, at Columbus). In further evidence that this might be a weak Big Ten, Iowa had to block two last-second field goals to survive Northern Iowa, 17-16.

There was no doubt who my hot player of the week was -- Jake Locker, Washington's QB: 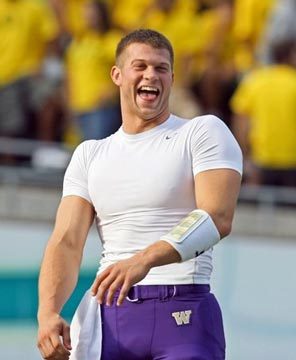