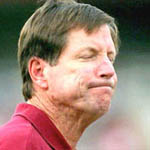 As the NFL season approaches its 2009 kickoff, one of the teams I'm most curious about is the San Diego Chargers. By all accounts, they are the prohibitive favorite to run away with the AFC West crown, and they are one of a half dozen teams called a "favorite" to win the Super Bowl. But when I see things like Shawne Merriman's arrest for alleged "battery and false imprisonment" of reality show "star" Tila Tequila, I scratch my head.

I discount the Chargers' chances of winning it all based on two words: Norv Turner. There is just no way I see this guy ever getting to the Super Bowl, let alone winning it. I don't believe he has the personnel-management skills a head coach needs to get to the big game. Is it his fault Merriman was arrested? Of course not. But when his defensive leader is getting into circumstances where he is accused of choking a woman, it tells me he still doesn't have control of this team, and that worries me for him.