Wrestling's gay stereotypes have to go

Share All sharing options for: Wrestling's gay stereotypes have to go 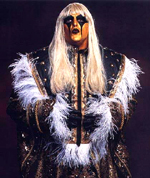 Robert Skvarla, Inside Pulse's wrestling columnist, has written a fantastic piece about homophobia in wrestling. His premise: The use of stereotypes in entertainment is cheap and offensive, and wrestling should look long and hard at the constant labeling of gay characters as stereotypical heels.

These stereotypes in some way all confirm society's worst views on homosexuals. While a character like ["Exotic" Adrian] Street may have been progressive in his portrayal of a gay character as a strong figure, he was almost always characterized as a villain, never allowing his character to grow beyond the one-note representation he initially offered.

He does a fantastic job of chronicling the history of "gay" and effeminate characters in wrestling, dating all the way back to Gorgeous George of the 1950s.

He also talks about the inherent homoeroticism of wrestling, and how professional wrestling doesn't have a problem playing to it.

It would be hard not to notice the homoerotic undertones that are present in the world of professional wrestling: nearly-nude men with oiled bodies and pristine skin/hair/physical traits grappling with each other to assert dominance; a figure like Sigmund Freud would have had a field day with these sort of sexual contractions. It was also be hard not to notice that the most successful wrestlers the industry has ever seen were also the most conventionally attractive; while early on wrestling promoted the likes of tough guy everymen in the vein of Harley Race and Dusty Rhodes, eventually it grew into preening bodybuilders like Hulk Hogan, Lex Luger, and the Rock.

A great read that exposes into the psyche of the executives and fans of pro wrestling.