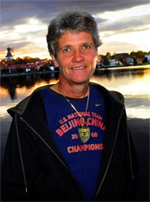 Pia Sundage, the first non-American to coach the U.S. Women's Soccer Team, is now also the first openly gay coach of the team. Sundage, who is Swedish, came out during an interview with TV host Lasse Bengtsson on Swedish TV:

There has been no problem for me to be openly gay as head coach in the U.S.

What's interesting in that little tidbit is that she called herself "openly" gay. Her sexuality was no secret among those in-the-know. Still, she hadn't called a news conference to declare it.

Sundage is a star, having led the U.S. to a gold medal in Beijing.

Now the cat's out of the bag, we'll be watching to see the reaction, and if there is much of one. It's still yet another semi-high-profile personality in sports to come out and say being gay hasn't been a problem for them. That's like 100 who say "no problem" for every one who had a problem.