Tim Tebow cuts ad for Focus on the Family

Share All sharing options for: Tim Tebow cuts ad for Focus on the Family 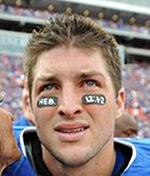 University of Florida quarterback Tim Tebow and his mother, Pam, have filmed a 30-second ad for Focus on the Family that is set to air during the Super Bowl. Focus on the Family is antigay and gave $727,000 to support the passage of the antigay marriage Prop. 8 in California in 2008. Reports the Orlando Sentinel:

Focus on the Family, a non-profit Christian organization, is not elaborating on the commercial's message, but the story is expected to detail the Tebows' pro-life message in line with Christian faith.

Pam Tebow contacted amoebic dysentery while on a Philippines mission, and the bacterial infection sent her into a coma. Upon recovery, doctors urged Pam to have an abortion because of the damage to her body. Tebow was born healthy on Aug. 14, 1987.

Tebow has been outspoken about his faith and inscribed Bible verses on his eye black on game days.

Super Bowl ads running 30 seconds will cost between $2.5 and $2.8 million this year. Focus on the Family spokesman Gary Schneeberger told the Denver Post that "every cent for this ad was paid for by generous donors who specifically gave for this project because they are excited about this opportunity for Focus to show who we are and what we do."

Tebow, who will enter the NFL Draft this spring, has never been shy about promoting his Christianity. However, Focus on the Family is not a church, but a very active political advocacy group that has been very up front with its stands against gay rights. For example, the group's founder, James Dobson, has said that gay marriage would lead to "marriage between a man and his donkey." The group is also against passage of ENDA, the bill that would prohibit employment discrimination based on sexual orientation.

I am not sure what Tebow's views are on gay issues, but it is important for people to know the kind of group he is willing to do a promotional ad for. In this case, one that would deny gay people the most basic rights available to other citizens.