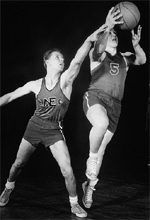 A Florida-based promoter has started a fundamentals-first men's professional basketball league that will allow only U.S.-born white players. Don "Moose" Lewis is starting the All-American Basketball Alliance because he thinks there is a market for basketball that isn't about fast-breaks and dunks. He also said he's tired of hearing about the legal trouble NBA players get into. No word yet if he's going to bring back the short shorts.

I heard him talking on the Michael Irvin Show, and Lewis said he's not racist. In fact, he asked Irvin if he wanted to buy a franchise (at the cost of $10k); Anyone can own a franchise, but only white Americans can play. He said the focus of the league is fundamentals, and that the white-players-only angle is just a marketing hook:

There's nothing hatred about what we're doing. I don't hate anyone of color. But people of white, American-born citizens are in the minority now. Here's a league for white players to play fundamental basketball, which they like. Would you want to go to the game and worry about a player flipping you off or attacking you in the stands or grabbing their crotch? That's the culture today, and in a free country we should have the right to move ourselves in a better direction.

You gotta give him this: It's certainly hooked the media as the story is everywhere.