Over the holidays I got to watch a reality show most definitely worth watching, and with a couple lead characters truly worth cheering for. 650-Pound Virgin features David Smith who was, just a couple years ago, 650 pounds. While people that large are told their only hope is stomach surgery, David did it by changing his diet and light exercise. That's David in the picture: Before and after. He couldn't have done it alone: Local fitness maven Chris Powell took on David as a project. Now David weighs in the low 200s, and he and Chris have become best friends and roommates. 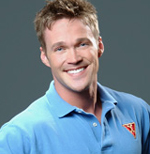 For those looking for nutrition and exercise tips from the two men who engineered a 400+ pound weight loss, they have a program called "Reshape The Nation". While there's a fee for access to their whole program, the site has a lot of great free information. Chris (left) has made an industry out of his success with David; As well he should, given the amazing transformation he got out of David!

Video and some tips from Chris after the jump.