A bronze sculpture of a nude hockey player taking a slap shot, that fuses the modern with the ancient, will greet visitors to the gay meeting place at the upcoming Winter Olympics in Vancouver.

Gay Whistler, which will sponsor PRIDE house at the ski resort during the Games, secured government grant money for "Slapshotolus," a piece by Edmund Haakonson (full sculpture below). Dean Nelson of Gay Whistler described the meaning of the sculpture:

It is a symbolic expression of the concept that one who lives a life of noble ideals does not require protection, does not need to cover because there is nothing to hide. Haakonson has taken a Classical Greek image that is an expression of this ideal and given it a 21st century make over, a modern face. It is a connecting of the ideals of the ancient sacred games and the ideals of the modern Winter Games. In the process of the production of this work Haakonson discovered a strong resemblance between the pose of a hockey player drawn back to take a slap shot and the pose of the ancient Greek sculpture the Discus Thrower which increases the connection between ancient and modern.

"There is also an element honoring the Canadian sense of humor as expressed in popular television with shows like "This Hour Has Twenty Two Minutes," "Royal Canadian Air Farce" and "Rent a Goalie." The image of ancient nude sculpture makes perfect sense to us, the image of a hockey player makes perfect sense, the hybrid of the two has a decidedly amusing result. There is an element of the absurd in a hockey player wearing only skates, gloves and helmet, especially for anyone who has actually played hockey. There is however, no conflict in the absolutely serious and the humorous co-existing in a single work, I would suggest that it reflects the true reality of life."

The piece is technically well done but I am resisting every urge to make a snarky comment lest I come across as some sort of Philistine. So I ask all you art devotees: Does this piece work? Thumbs up or thumbs down? Would you watch more hockey if the players skated nude? Will Johnny Weir pose with the sculpture? 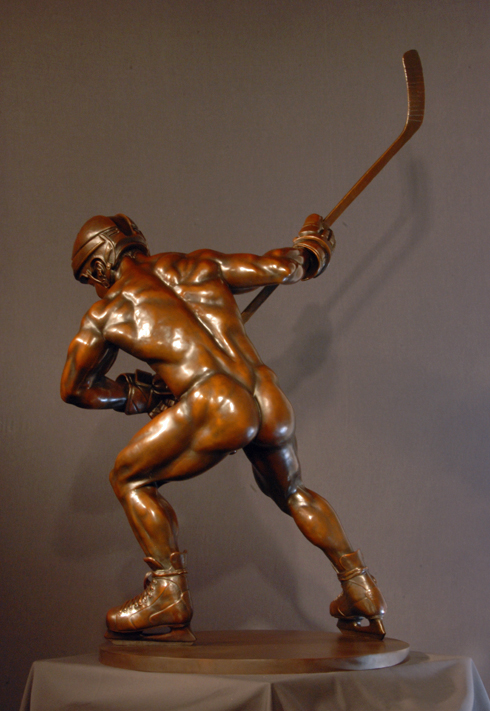