Share All sharing options for: Tiger Woods on lesbians, gays and black guys 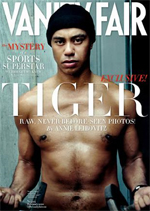 Vanity Fair has released a bombshell issue that features Tiger Woods on the cover and in its crosshairs. Wearing a black skull cap and lifting a couple barbells, the picture of Woods conjures images of Allen Iverson, not the grand-champion family man we thought Woods to be two months ago. And the article inside the issue allegedly goes even further.

The Vanity Fair article, written by Pulitzer Prize winner Buzz Bissinger, claims Woods made a "series of profane quips" about sex and athletes during an unreleased 1997 GQ interview.

Woods, who was 21 at the time, reportedly said during the tape recorded interview that lesbians are "faster" at sex than gay men because women "are always going 69".

He also reportedly said he "can't figure out is why so many good-looking women hang around baseball and basketball".

"Is it because, you know, people always say that, like, black guys have big dicks?" he said.

It's becoming hard to believe some of the tidbits coming out about Woods. Is it possible that he was just a pimp-daddy horn dog with a foul mouth all along? And if so, why didn't this writer publish these quotes 10 years ago? It seems a littly fishy to me.