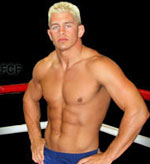 Daniel Puder stands 6-3, weighs 235 pounds and has an 8-0 record as an MMA fighter (he was also a pro wrestler). It's hard to believe, though, that he was once bullied. He is now reaching out and offering help to victims of bullies. As he told TMZ:

Anybody that's getting bullied in the whole U.S. can shoot me an email at dp@knockoutsgym.com. ... You email me, I'll go fly to your school ... and we'll go talk to the bullies for you.

On his Facebook page, Puder had written: "There is an issue with our society when gay young kids are getting bullied to the point they are killing themselves." He is using his status to now try and make a difference. Since his contact information was posted on TMZ he has received thousands of e-mails from victims of bullies. During an MSNBC interview he said he wants to formulate an anti-bullying plan once he returns from wrestling in Japan.

I do not know Puder's sexual orientation -- his Facebook page says he's interested in men and women -- but no matter. As an MMA fighter he can reach a demographic that other anti-bullying advocates can't and I applaud him for taking a stand.