Lincecum or Halladay: Whose balls to face?

Share All sharing options for: Lincecum or Halladay: Whose balls to face? 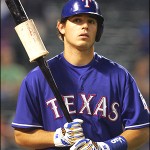 Personally, I would prefer to face Ian Kinsler's balls but he isn't a pitcher so that is for a completely different forum. The American and National League Championship Series is about to begin and all of the pitching match ups are intriguing.

The Bear vs. The Twink: What better drama than Roy Halladay, the seasoned veteran and only second pitcher in history to pitch a no-hitter during the post season, versus 26 year old, long-haired, 5'11" 170 pound Tim Lincecum, who struck out 14 batters in his first post season apperance. By the way, it was also Roy's first post season appearance. The start of the National League Division Series should be an impressive duel between these two guys.

The Big Chocolate Bunny vs. The Hottie: 21 game winning C.C.Sabathia will take the mound with his 6'7" 290 pound presence and overpowering stuff, while bullpener turned starter C.J.Wilson will try to continue his surprising yet dominant ways. Even with these two great starters going at it, the American League Division Series will have balls flying all over the place and should be pretty entertaining.

Wow! Those are just the first games!