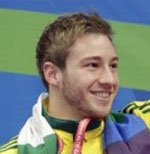 Australian diver Matthew Mitcham wound up with four silver medals at the just-concluded Commonwealth Games in India. The Games feature athletes from the 54 nations of what was formerly the British Commonwealth.

Mitcham lost the 10-meter platform event to Tom Daley of Britain, who had one dive that had perfect 10s.

"I blew it,'' admitted Mitcham, after he fluffed his final dive to gift gold to his young rival. 'I gave it away, which I really didn't want to do. I was so close to winning," he said, frustrated he didn't dive ''even close to my best''.

Mitcham led in all four events, but won none of them. If he wants to repeat as Olympic gold medalist in 2012, he will have to up his game. The Chinese divers will be favorites, while Daley will have the home-pool advantage.

Mitcham, who is openly gay, was a bit hit with Indian fans, some of whom held up signs saying, "Matthew Mitcham: India loves you." Said Mitcham: "I am swelling with pride that they are here to support me."

Some gay Indian fans could not get tickets to Mitcham's events because of a ticket snafu, but that did not stop some from gushing over having an openly gay athlete at the Games. Said one:

"A friend mentioned that a very hot gay swimmer is coming for the games and when I looked him up on the net, I knew I wanted to watch his moves, rather literally!"