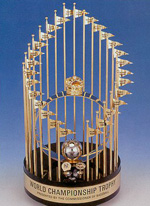 You would have made a lot of money had you bet before the season that the World Series would pit the Texas Rangers against the San Francisco Giants. But that's the reality after both teams won their league championship series in six games.

On Friday, the Rangers beat the Yankees, 6-1, and on Saturday the Giants held off the Phillies in a nail-biter, 3-2. The game ended with Ryan Howard taking a called third strike on a pitch from Brian Wilson with two men on. It ended Philadelphia's hopes of making the World Series for a third consecutive year.

The World Series winner will end a long drought -- the Rangers have never won it all, while the Giants last won a championship in 1954. Game 1 will be in San Francisco starting Wednesday. I'll take the Rangers in six.