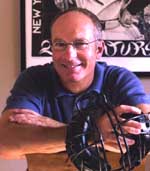 Dave Pallone has penned a short piece for the gay professionals site dot429 comparing DADT to the state of gays in sports. It's a comparison we've seen made before, but few people know it better than Pallone.

Ever since Abner Doubleday invented the game of baseball there have been players who are gay. That is the same with our armed forces. This will never change. The question is whether or not LGBT can be open about their sexual orientation and remain in the profession they truly love.

This has been the issue at the top of my mind for years. Athletes know they're showering with gay guys, so why do they care if that person is openly gay or not? Eric Anderson pointed it to me years ago: Guilt by association. If one athlete on the team is gay, the team will be labeled by some a "gay team." Crazy how these big, macho guys couldn't handle someone thinking they might be on a "gay team."