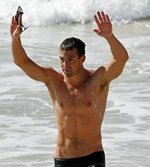 Fran Crippen was a 26-year-old competitive swimmer who died off the coast of the United Arab Emirates this weekend during a 10-kilometer open water swim. The exact cause of his death is still unknown, but Crippen apparently said he was not feeling well prior to the race, which was held in very hot conditions.

It's always shocking and sad when an athlete dies in competition, especially one so young and fit as Crippen, a former University of Virginia swimmer. USA Swimming says it will investigate his death amid charges that race organizers were not prepared to deal with any swimmer who fell ill.

Christine Jennings [told the Washington Post] she vomited several times in the water. Jennings, 23, got dizzy and veered off course. Fearing she would black out, she turned over and swam on her back with an arm in the air to signal her distress to the safety boats that are supposed to follow the swimmers in such races.

But when no one responded, Jennings struggled to the finish, where she staggered out of the water with the help of a fellow swimmer and was taken to a hospital.

"It was a disaster," she said. "I'm floating on my back for several minutes, thinking 'Why isn't anybody checking on me?' "

Crippen's sister Maddy told the Washington Post that her brother was nervous about competing in open-water races overseas:

One of the things that worried Fran was when he went to some [international open-water events], there weren't a lot of people there he could rely on in terms of health and safety. Because it's such a new event, it's like trial by error. And that was a horrendous error.

There are also reports that Crippen would consume 10-15 gel packets that contain high amounts of caffeine, which could be dangerous when competing in 100-degree heat. FINA, the international swim federation, says it will also investigate race conditions.

By all accounts Crippen was well-liked in the swimming community. Michael Phelps spoke for many when he wrote on Facebook: "We lost a great person and swimmer today in the tragic loss." A Facebook tribute page has more than 19,000 recommendations. A second Facebook memorial page pays tribute to Crippen.

His death raises serious issues about how these open-water events are handled. The best way to honor Crippen's memory is to set standards to ensure that such an event never happens again.