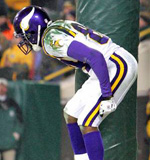 File this under "shocker:" The New England Patriots have traded wide receiver Randy Moss to the Minnesota Vikings for a third-round pick in the 2011 draft. Great, Randy Moss now with Brett Favre. The two NFL players I dislike the most in the same huddle. Pass the popcorn and let the show begin.

Moss has been the most feared and flawed receiver in the game. He has scored 12 more touchdowns the past three seasons than any other player and teams always have to double him. On the other hand, Mr. "I Play When I Want to Play" regularly dogs it by not running his routes or simply disappearing during games.

Cyd has always loved Moss and it's always puzzled me. I play sports with Cyd and he is a fantastic teammate. He wouldn't be able to stand a guy like Moss on his team, someone incredibly talented who could flake out and stop trying at any moment. Moss lost me forever when he quit on the Vikings during their 41-0 loss in the 2000 NFC title game, upset that members of his posse didn't get field access.

Moss wore out his welcome in Minnesota then Oakland and now New England. I bet he will shine this season with the Vikings and then revert to pouty, distracting Randy next season (especially if Favre is gone and he has Tavaris Jackson throwing him passes).

I don't see how this makes New England better on offense. Without the Moss deep threat, teams can now focus on Wes Welker and the tight ends; expect to see a lot of dink and dunk in New England. The Patriots have stockpiled two picks in each of the first four rounds next season, so this was clearly a move made for the future. Only time will tell if it pans out, but for now I will be happy just to root even more for the Vikings to fail.