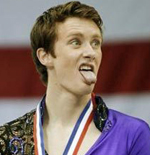 Outsports asked former elite Canadian skater Chad Conley to preview the men's field in the Olympics figure skating competition, which features stars such as American Jeremy Abbott (right). Chad will be in Vancouver and will send us periodic reports on the event. Read a profile of Chad that talks about his ups and downs as an athlete.

The Olympics are not just any other event. It is an event for the elite status athlete. You don't just wake up one day, and there you are -- your team jacket, walking in the opening ceremonies waving to a crowd with a perma-grin on your face like you just had the most mind blowing sex of your life.

Since the 1988 Olympics were held in my hometown of Calgary (I was 9 at the time), my life's mission was to make Canada's Olympic Team. At 9, you practically think it's going to be an easy task. For the years I chased that dream. I gave up everything to try and make that team. Home schooling, no Saturday nights out, no learning to drive, no sneaking out. Was it worth it? Yes for the most part. Most kids in figure skating would kill for the opportunities that were presented to me. Sadly, however, not everyone makes an Olympic Team. That includes me.

Scott Hamilton said it best: “Jeremy Abbott just brought his own beat down to the national championships.” Abbott defended his National title and won by more than 25 points ahead of Evan Lysacek. But Abbott has not skated well internationally since the 2009 Grande Prix Final. If Abbott wants to make the Olympic podium, he will need to make his quad into a combination to garner points. He'll have to put his nerves aside, and skate the programs of his life.

Lysacek is the defending World Champion. He lacked a world champion's command throughout the grand prix season, but showed up at the Grand Prix final and won. I'm hoping that his ass kicking from Abbott at Nationals will give him the drive and determination he did not display in Spokane. Lysacek has a good shot at the Olympic Podium, providing he doesn't play program suicide by putting a quad in at the last minute. He will need his triple axels, which were not available at the nationals.

Johnny Weir had potential. While most skaters start before they are 7, Johnny started skating at the age of 12 and shot up to stardom in no time, with a Junior World Title in 2000. It took him a few years to adjust to the senior life.

In 2004, Johnny Weir started his dominance in US skating, winning three national titles in a row. Then he placed third, then nearly won the following year, then 5th, and now 3rd again. Not to mention he finally hit the World Podium in 2008 with a bronze medal. I could go on and on about his off-ice issues from faux fur to “I'm Johnny Weir ... period.”

If Weir is going to be any sort of threat at the Olympics, he will need his best poker face, and two of the best skates of his life (good luck). If he misses this podium, he'll be sadly missing his already “D” list skating career.

Can Plushenko defend his Olympic title? He stands a good shot. Most people have been raving about his scores, but let's look at the big picture. Plushenko has not left Europe to compete. At the Cup of Russia he stood on the podium against a weak field. At the Russian Nationals he had no competition. At the recently held Europeans, he stood on top of the podium. By him not leaving his territory, the judges have been very kind to him.

His spins are not at the level of today's skaters, his programs have been designed for him to pose and catch his breath, and his footwork is pretty much the same as it was in 2006. He is getting old after all. But what Plushenko does that the rest of the men have problems with is to fully rotate all of his jumps. He may fall, but he still gets marks for completion of rotation.

You wanna talk a spinner? Lambiel has carried on the rich Swiss tradition of spinning. Lambiel retired last year sitting recurring injuries. Or did he retire because he chose to train at the same rink as Johnny Weir, and was no longer the center of attention? What Lambiel needs to work on is the consistency of his triple axel. The boy can land a quad toe, but his triple axel is probably his scariest jump. I would prefer to not be anywhere near him when he attempts it, you could die in the process. However his artistry is truly his own creation. Bottom line, he's one that could capture the Olympic gold if his competition isn’t careful. 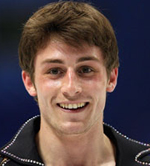 This will be the Frenchman's third Olympics. He ends up on world podiums, and then is off them the following year. Joubert changes coaches as often as people change their underwear and his attitude leaves a lot to be desired. But if he can put it together, he could medal. He's not the best jumper, he's not the best spinner, and his footwork is often knocked by the judges. But he is a former world champion, but has not produced as of late. 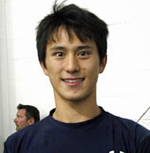 Chan was on his way to great destiny. At least that's what Skate Canada has been saying for three years. In 2008, Chan would defeat Jeff Buttle for the Canadian title. His trip to the worlds did not fit the billing he was getting. While Buttle landed on top of the World podium, Chan struggled throughout the event.

In 2009, he went almost undefeated, until the World championships where he was defeated by Lysacek for the gold medal. This Olympic year has been unkind to him. The flu after national training camp, then a torn calf muscle. He withdrew from one Grand Prix assignment, and then had a rough showing at Skate Canada international, struggling to a sixth-place finish.

The doctor who treated Chan for the injury was alleged to be importing illegal substances. Chan was cleared. If this isn't enough to make you have a nervous breakdown, his coach, Don Laws, took a hike a week before the Canadian championships. Conflicts over training led to the breakup.

At the Canadian Champions, Chan was still not up to his 2009 level of performance, and was given overly generous scores in his programs. The Canadian crowd wants Canada's first men’s skating gold, but at 19 with the year of drama he's had, can he silence his critics and answer with a program of his life? Time will tell.

Skater On The Bubble

Oda looked liked he was on his way to becoming one of the skating most elite competitors. However, after being busted for a DUI, he was suspended by the ICU and Japanese skating federation, and a result missed the entire 2007-08 season. He has slowly been climbing back up the ranks this season however, with two Grande Prix wins, and found himself with a sliver medal on the podium at the Grande Prix final. Skating to Charlie Chaplin in his free program, with two solid skates, he could very well be the surprise skater on the podium.

We have eight men who have the skills and talent that could change their lives within eight minutes. An Olympic win would set them for life. With Olympic gold, you no longer have to prove you are the best. But in order to win, you need the stars to align with the planets. They will need to ignite magic, they will have to blend sheer human power, animal technique, blend each stroke of their blades and make it their own.

I predict this will be how it unfolds for the podium:

Related: Conley with Jim and Cyd on the Outsports Podcast.