Share All sharing options for: A lame Opening Ceremonies

Watching the Opening Ceremonies and was struck by what appeared to be four giant ice penises rising from the stage. Apparently, they are welcome poles of the aboriginal Canadians, or First Nations. Check out the photo below if you think I'm kidding.

This is a rather blah opening so far (we're about halfway through and the Canadian team has just entered), but feel free to share your thoughts below on the events. Update: The event is over, so change blah to totally lame. There was a nice touch or two (the whales were cool), but a tattooed fiddler? A tribute to the vast Canadian prairie?

And, to top it off, they screwed up the lighting of the Olympic cauldron.

One of the mechanical towers that was supposed to rise and form the cauldron didn't, so only three quarters of the four torchbearers finished their job after a rather long wait. Then, since the torch has to be lit in a visible outdoors spot, a Chevy Tahoe (I kid you not) drove Gretzky through the streets of Vancouver to lit the flame. It was all rather embarrassing and anti-climatic and like an SCTV skit. Thankfully, we all forget about these things by the next morning. On with the Games!

But first, the welcome poles:

From the New York Times:

They originated with the Salish people, a collection of indigenous groups that populate the Northwest Coast. Quoting from the media guide: "Welcome Figures" or "Welcome Poles" would be erected at the outskirts of a village or settlement (often on a beach, as ocean-going canoes were the most common form of transport among the among the coastal peoples). Many of these welcome poles had hinged arms, and if the expected visitors were welcome, the arms would be raised in a gesture of greeting; if not, the figure's arms would remain down, by its sides." Needless to say, the arms are raised. 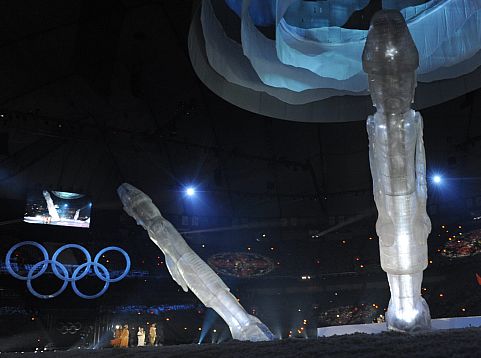