Share All sharing options for: Olympian: Why gay jocks don't come out 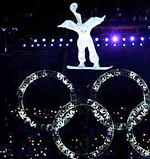 I asked a friend of mine, who is gay and who competed in the 2006 Winter Olympics and who is a member of the National Guard, why he thought there were so few out athletes in Vancouver. His reply was so interesting and articulate, I asked him if I could post it here.

He is insightful about what keeps Olympians in the closet, "crushes" in the Olympic village, parallels to Don't Ask Don't Tell, and even some advice for Bode Miller about getting to bed early before his race:

By A Former Winter Olympian

I don't think much has changed within Olympic sport since I competed in 2006, despite Matthew Mitcham winning gold in 2008. Sport and the military are the last vestiges of homophobic, conservative tradition in Western culture.

Whereas the military could be made less homophobic by policy (if someone got around to doing that), sport is a disparate and complex network of organizations, sponsors, and athletes that span the globe, whose values can't be changed by decree.

Much more importantly, Olympic sport has firmly reached its goal of becoming a business. The Winter iteration reached that milestone with the 2002 Salt Lake City Games. Results are paramount above all else.

While you may see humanitarian causes, like environmentalism and pacifism, and the Coubertin quote, "The most important thing in the Olympic Games is not winning but taking part," continually espoused by the IOC, much of this is driven by PR gurus who believe that these causes enhance the Olympic brand. For some reason, social causes like gay rights are not as readily taken up by the Olympic movement. It's too thorny.

Being an athlete who is gay may not elicit outright harassment as likely occurred in the past, but it may be perceived by the athlete as a distraction from results. Athletes who are gay have nothing material to gain by coming out publicly. And as an athlete, you must think about things in terms of their utility, especially because sport is now both financially and athletically competitive. No longer is it just, "What else can I do to get that extra edge?" The mantra now becomes, "What else can I do to appease and win over sponsors?"

While it may seem from the outside that coming out would generate a lot of publicity, I feel that that kind of media attention would be falsely earned, that it wouldn't be garnered for my athletic success, but for my sexuality. There is a strong dislike held by many elite athletes for the "human interest" stories that come around every Olympics. I think that this sentiment within my Olympic team made me focus completely on my training and results, so that I could earn that media coverage as an athlete, not as a gay man.

I have met several other gay athletes in the years since Torino (a few of them who will be competing in Vancouver), who share this sentiment. I e-mailed several of them to check on whether they'll be making their sexuality public or not. None of them had as of a few weeks ago, but one was still debating whether the extra media attention was worth the additional stress of having that media distraction during the Games while he's trying to win a medal in speedskating.

After receiving a media inquiry, I considered coming out in the weeks leading up to these Games as a gay-soldier-Olympian, hoping that it might finally bring gay issues into the consciousness of Olympic sport and further the fight against Don't Ask Don't Tell. However, I thought about how distracting that could have been to my former teammates, who are going after medals with the odds against them, and decided against it.

Consider another angle: The lifestyle of an Olympic athlete who trains hundreds of hours a year, for upwards of a decade, travels 300 days or more per year, living each week in a new country for a camp or race series, and all the while, focused completely on one goal often years in the future.

This is not conducive to a relationship. I thought I was the only gay athlete who felt like this, but apparently, it's pretty common for many of us to hold out on figuring out our sexuality until after we're done competing. Many of my straight teammates also don't seem to really get into serious relationships until they near retirement, simply because of the distance factor.

I didn't formally meet any other gay athletes at the Games in Torino, though I certainly did have some Olympic Village crushes. There was one particular snowboarder who I remember exchanging glances with every day. The public seems to imagine that the Olympic Villages are just non-stop parties. I don't think you'll find a gathering of people anywhere else that consistently has a 9 p.m. bedtime than at an Olympic Village. When you're competing at the Games, too many people have put too much time and energy into your performances to blow that chance partying it up. (Bode, take note.)

Editor's note: Ryan Quinn is a former collegiate cross-country skier (who was out to his team) and he still keeps in touch with fellow winter sport athletes. He has vouched for identity of this former Olympian and I trust Ryan 100%. Since there is some confusion: Ryan is not the Olympian, he is the post's author; the Olympian is anonymous, as we thought was clear.

There are almost no publicly gay athletes at the Winter Olympics that we know of (Johnny Weir is another subject). My original note said none were open, but commenters have set me straight. Cyd and I have each heard rumors that a dozen gay Olympians will come out in Vancouver. Don't hold your breath -- there's a better chance that Bigfoot and the Loch Ness Monster will win pairs skating. --Jim Buzinski