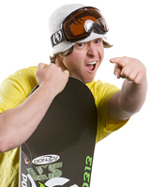 Snowboarder Nate Holland doesn't like the tighter pants some other 'boarders are sportin', bro. He like totally thinks that abandoning his baggy jeans would be like a total sell-out, dude.

"I think the problem we have now is the emo look," he told the New York Times, "and people trying to use that as an excuse for wearing tight clothing."

But apparently he's okay with all the big corporate sponsorships for snowboarding, or the fact that it's an Olympic sport, or that ESPN hosts the X-Games (which he participated in). With his anti-establishment problem debunked, I have to wonder if it's the whole gay thing, bro. I mean, tight pants could show some package, and that'd be way too gay for 'boarders, dude.