Share All sharing options for: Enough already on Petter Northug 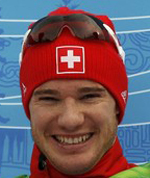 The men's 15km cross-country freestyle was an edge-of-the-seater, with several skiiers almost sprinting over the last couple of kms. Their extreme efforts seemed almost surreal amid the dream-like beauty of Northwest forest all muffled in deep snow. Dario Cologna of Switzerland (photo) won with a powerful finish, and looked surprisingly fresh as he talked with the press afterwards.

But Norwegian icon Petter Northug, who had been touted by many as a sure winner, struggled so visibly from early in the race that he finished a dismal 41st.

The NBC commentators couldn't resist going on and on with their insinuations that Northug had brought eternal national shame on his country by his disastrous performance.

Okay, so Northug has not endeared himself to everyone with the "I'm the greatest" attitude. But things can and do go wrong for the greatest athletes, whether they have Attitude or not. When that happens, it's better for the folks at the mike to give it a rest. They can have a little respect for the effort -- to adopt a neutral stance and at least reserve judgment till they know the whole story.

Though a mere plodder when I did marathoning, I can put my imagination inside Northug's awful feeling of finding himself so overfaced in a career-defining race that he'd trained hard for. Maybe it was a case of not recovering 100 percent from the major effort a month ago, that it took for him to narrowly win the 10km at the Tour de Ski in Germany. Whatever the reason, we'll probably find out what it was.