Share All sharing options for: College lacrosse captain comes out as gay

When Oneonta State University lacrosse player Andrew McIntosh contacted Outsports a couple weeks ago, it was to thank us for all of the coming-out stories we had featured on the site. Today, his story joins the list.

It continues to surprise me how welcoming so many college sports programs are for gay athletes, and McIntosh's story is another example in a growing list. As soon as he came out to his coach, Dan Mahar, he was met with open arms. Mahar said there's the potential Andrew's revelation could hurt the team in the short-term, if one of his teammates has a problem with Andrew's sexual orientation. But Mahar thinks the potential for it to affect the team positively far outweighs that.

I think his decision to do this will, long-term, be a huge benefit for our team and program. We're a college lacrosse team. The reason the University sponsors our sport is the philosophy is there's an educational component. That's why our students are at the college, and this is part of their education, to be around people from all different backgrounds, and get to understand them. 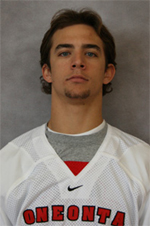 One of McIntosh's co-captains, Matt Coyne (right), is excited about the new revelation actually making the team better.

I think it might be something that can bring our team closer, because it shows we're able to trust each other with our personal lives. It might bring us closer on and off the field, making us a better team.

Coyne, who said he had gay friends in high school, said he and McIntosh are closer than ever, and he appreciates the friendship with his teammate even more for having the faith in him to come out. The two are so close and trusting that McIntosh isn't shy about telling his co-captain how good-looking he thinks his is; and Coyne doesn't mind one bit.

It doesn't bother me. He knows I'm not gay. He jokes around with me about it all the time. If I don't shave he jokes that I dropped to a 7 [out of 10].

Still, both Mahar and Coyne have thought about how other players and other teams they face will react to the news. Coyne said some teammates will have trouble understanding the issue of playing with a gay guy.

Some of the kids haven't grown up with the idea that it's his acceptable. In high school, there are kids who say they're gay but they really don't know. For me, [how someone handles the news] is just a difference in maturity. 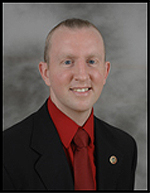 Mahar (right) wondered how anti-gay comments on the field might affect his newly out player.

"Coach, I've already heard those comments before," McIntosh told Mahar. "It's not going to be anything new to me."

What will be new for the other Oneonta players will be hearing "fag" thrown around the field and now knowing that one of their teammates is in fact gay. And Mahar has thought about that, too.

A year ago, it was a word but now it's something that has more meaning because of how it affects someone we care about. Maybe it's a good thing for our guys to hear it and experience it. It will obviously bring some challenges, but I think it also brings up some opportunities as well.

When asked why he is so accepting of McIntosh, and why he squelched anti-gay language on the team before he knew he had a gay player on his team, Mahar said it's the role of a coach.

I take my job seriously. We try to win games, and no one wants to win more than I do. But I also recognize that's not the primary reason we have a sport here. I take my job seriously as an educator. I know if I haven't coached a gay player, I would before I was done. Even if I never had, part of my job is to teach our players what is appropriate. What's been acceptable in our society is changing, and it's changing for a reason. Our sport has a reputation for bein behind the times, and there's no reason for it. My job is to make sure these guys leave Oneonta prepared for success.

I asked Coyne, who has high expectations for the team this season despite national powerhouse Cortland being in their conference, if anything had changed in the showers, where so many anti-gay athletes say a gay man can't co-exist.

Nothing's changed. We all shower together, it's an open shower. It hasn't changed that. We kind of just accept Mac as one of us. Nothing different.