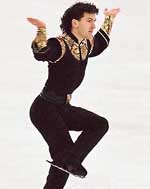 Canadian former Olympic silver medalist Elvis Stojko is still on the warpath, fighting the horrors of effeminate men in figure skating. And he didn't hold back in an interview with Salon:

"People in the gay community have to realize they've got to take themselves out of it. It's not against anybody. I've been getting heat for this, but there are people behind me saying that they appreciate it. It's about what people can identify with when they're watching the sport. It doesn't have anything to do with gayness. Effeminate men can identify with effeminate skating. Masculine men can't identify with that. When I watch it, I can't identify because I don't move like that. My consciousness doesn't feel like that.

"It's the way you carry yourself. There's a certain strength to it when a masculine skater steps onto the ice and attacks a program. With the feminine skaters, the use of the hands becomes very soft, down to the fingertips. There's a lot of little details, but essentially you can pick up on it in the first few movements."