5 out lesbians at Winter Olympics

Share All sharing options for: 5 out lesbians at Winter Olympics 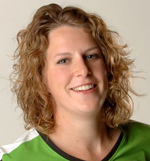 Yesterday we posted a great e-mail from a former male Winter Olympian who is gay, writing that gay athletes see no upside in coming out publicly. This is certainly true of the men, where no one is publicly out* (*Johnny Weir is a whole other story). But there are at least five out lesbians, though none is an American.

Wüst is upset that she is asked about her relationship as much as her skating.

"I want to talk about ice skating", Wüst said in a recent interview. "You are not asking Sven Kramer (Dutch, European and World All-round Champion, Ed.) about how his relationship is going. So why would you ask me? If I would've had a relationship with a guy, you wouldn't have asked me either."

I find her comment baffling. Straight athletes get asked all the time about whom they're dating or about their spouse. Kramer, who won speed-skating gold Saturday, has a girlfriend who is an Olympic field hockey player. I know that because their relationship made the lead of AP's coverage of Kramer's race.

The always-excellent Pat Griffin in her blog had a nice take on the whole issue of out athletes being role models:

Clearly, it isn't that Ireen Wüst is closeted. She is open about being a lesbian. She just doesn't want that to be the lead story during the Olympics. Fair enough.

The problem is that we are so hungry for LGBT role models and visibility in athletics. We know that the more openly, publicly out LGBT people there are in sport and everywhere else, the more things change for the better. We just have to remember that openly lesbian or gay athletes are not necessarily interested in being public spokespeople or interested in making their personal lives public or at least not making their personal lives the focus when they'd rather focus on their athletic accomplishments.

Until every Olympian and every pro or collegiate athlete has the privilege of talking freely about their sexual orientation and their relationships and their families without fear of financial or competitive reprisals, we will have to be grateful for the LGBT athletes who choose to be public and use their visibility as a platform for social change. We also must understand the decisions of others not to.

While it is still marginally easier for women to come out publicly, five is not a big number. However, with both men and women, we don't know who might be out in their immediate sphere but not publicly. Maybe no one has asked them the question or no one in their circle cares enough to make it an issue, or they adopt a don't ask don't tell policy. Whatever the case, being an out Olympian is still a rarity.