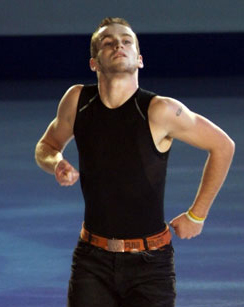 Belgian figure skater Kevin van der Perren caught my eye at the Olympics in 2006, and he did it again during the men's short program Tuesday night. He had one of the most striking outfits for the night (the black-and-white skeleton number), and he may have had the most chiseled face. While earrings aren't generally my thing, I love that he's got a couple of them. Sorry guys, he's recently married (to a woman).

He was 12th after the short program with virtually no shot at a medal, but he'll still be nice to watch during the free skate Thursday night. More photos after the jump.