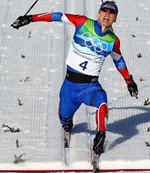 The best event I've seen so far has been the men's individual sprint in cross country. The final pits the top six qualifiers in a mile sprint that was exciting and had an awesome ending where two Russians crossed in a photo finish and waited several minutes before a winner was announced.

Nikita Kriukov (Bib No. 4) came from behind and edged out Alexander Panzhinskiy (No. 1) by maybe a foot with a last-second lung. It was captured in this brilliant photo from Getty Images that shows all the drama and passion that sport can bring. Watching it live (a rarity in these Games) made it more special.