Share All sharing options for: Figure skaters bring out homophobia 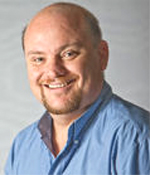 We've received a few tidbits around the world about men's Olympic figure skating bringing out the worst homophobia in the big, macho world of sports talk. John McClelland, President, Stonewall Democrats of Denton County, Texas, copied us on a complaint he sent to 105.3FM KRLD in Dallas about comments afternoon host Gregg Hanson (right) made about Johnny Weir. "yeah we know you're gay, queen" and "it's your choice to live that 'lifestyle'." Are people, even the jerks on sports radio, really still pushing this idea that we chose to be gay?

John "Rock" Mamola on 670 The Score in Chicago said people at the station never talk on air about how great of an athlete Johnny Weir is, because all they can think about is whether he's gay.

When talking amongst the crew at WSCR about Johnny Weir, we never get to the conversation about how he performed the night before. I am sure you have the same issue when Weir's name comes up among your Olympic viewing friends or co-workers as well. We never bring up that he is one of the best in his sport today because it always circles back to the question that seems to be on everyone's mind.

The comments of two Australian commentators even made it to TV.

The broadcasters described skating routines at the Games as "Brokeback Mountain" exercises - a reference to the Oscar-winning film about two gay cowboys.

Eddie McGuire and Mick Moloy also quipped that the Games' organisers were shocked to discover one of the male ice skaters was NOT gay and mocked their costumes.

Not super homophobic, but pretty childish.