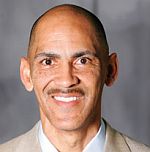 NBC just showed celebrities in the crowd at the men's figure skating long program (video below). One was Dallas Cowboys owner Jerry Jones. I kind of get that -- he's had a face lift, so has some appreciation for style.

But Dungy, the fomer Colts coach and anti-gay marriage fundraiser? In an arena filled with gays, on ice and off? Extra prayer tonight!

Johnny Weir would earn my utmost admiration if he would go up to Tony Dungy and immediately start making out with some dude.

Jerry Jones and Tony Dungy in the crowd for men's figure skating. Take that, American notions of masculinity!