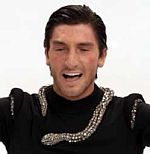 I am no skating expert, but it appeared to me like Weir got under-judged. Our skating writer Chad Conley, who was down on Weir pre-Olympics, left me a message that said, "Johnny got robbed tonight."

The Lysacek result seemed fair, since Plushenko was not that inspired. "It was definitely my best, and that is what I came here to do," Lysacek said. "Of course, you know it's been tough the last couple of months not thinking about the results, but I've had to shove all those thoughts out of my head, and my thought process was just mind your own business."

Weir also shared his emotions: "I did the best I could," Weir said. "There were a few small flubs I made. I was very proud of myself. I was crying before I went on the ice. I had tears streaming down the side of my face and had so much emotion that I couldn't get out of me."

Plushenko, though, was a less-than-gracious runner-up: "I was positive that I won," he said through an interpreter. "I suppose Evan needs a medal more than I do. Maybe it's because I already have one. I have to share with you, though, two silver and one Olympic gold, that's not too bad."

Finally, Elvis Stojko was totally bitter that Lysacek won, writing for Yahoo that it ruined skating because of the new scoring system.

Use this as your thread to discuss the result and anything to do with the long program. I still think it's funny that Jerry Jones and Tony Dungy were on hand.