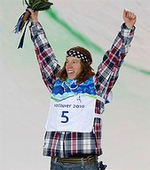 If you want to know why the TV ratings have been solid gold for NBC this year, look no further than the medal count. After the first week, the United States already has 20 medals. While the Russians were yapping about aiming for 40 medals at these Games, it's the Americans who have a seven-medal in the medal count over Germany, and have 15 more than Russia's five.

In the 20 Winter Olympic Games the United States has participated in, they've averaged about 10 medals per games. Only once has the U.S. earned over 30, and that was 2002 when Salt Lake City hosted the event. The U.S. has never won the medal count at the Winter Games, and no country has ever won more than 36 medals at a single Winter Olympics. The U.S. is in reach of all of those records.

There's nothing Americans like watching more than Americans winning medals (and you can say that for a patriot in any country). As long as the Americans stay hot in the cold, the ratings shouldn't dip this week.