Super Sunday: Red, white and blue all over

Share All sharing options for: Super Sunday: Red, white and blue all over 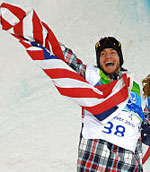 Jimmy D, 23, lives in the Frozen North and is filling us in on the Canadian Olympic obsession.Today: The Olympic spirit, U-S-A! U-S-A!, who's gpoin

We've hit the halfway mark of these 21st Winter Olympics. Or if you're Roman, the Olympiad XXI. Whatever. There have already been many magical moments to say the least. One occurred just last night. To me, it completely defined what the Olympics are all about. If you saw the Canada and Great Britain do battle in curling, you'll know exactly what I'm talking about. It wouldn't have mattered if you were red, white n blue or just red & white. This was special.

In the tenth and final end, Great Britain was clinging to a one rock lead. The Canadian third, Cutie Marc Kennedy was about to throw his final stone. He's in the hack, getting ready to deliver, when the jam-packed crowd started singing "O Canada."

At first, he was going to go ahead and play. Then the song grew louder. Freeze frame. Marc looked up at his teammate and said incredulously with watering eyes, "Have you ever seen this before?" The answer was no. Nobody had. He and everybody else just stood there, game on hold, while they waited for the song to end. That my friends was an unforgettable Olympic moment of Olympic proportion. ...

Now, back to the here and the now. Halfway and big day. They're calling it Super Sunday up here in Canada. Hey, that's a snappy title! I wonder why nobody's thought of that before? Obviously, American fans have to be extremely pleased by the results so far. And you should be! While we have our "Own the Podium" campaign, we thought it only neighbourly to sublet it to you...

I say it's a big day 'cause of the big game of course. Canada and the U.S.of A. Hockey baby! That's what the Olympics are all about aren't they? No? Oh. Yea you're right, hockey's only one sport of many being played in Vancouver. But it's THE sport. At least in these parts. So I kinda started to panic.

I had a story to write! I had something to say! But, how was I gonna get this done, have all the superfluous U's removed and get it posted before puck drop? It only added to my anxiety when I heard the game started at 4:30. How the hell am I gonna come up with all these pearls of wisdom before 4:30?!? Then thankfully, I found out it only started at 4:30 in Vancouver. It didn't start in the important places like Toronto or New York til 7:30. Whew! Lottsa time. Imagine my relief...

Game day. Big game. Did I say that already? Sorry, but everywhere I went yesterday, people wanted to know about the game. "Who ya takin' in the big game, Jimmy?", they'd say. Or "What's your best bet for tomorrow, Jimmy?" "Who do ya like Jimmy, Us or them?" "Why are they callin it Super Sunday, Jimmy. Isn't that football?"

It made me start to think about a couple of things. Firstly, who are these people and how do they know my name? But more importantly, it got me thinking, maybe I should make a bet on the big game. I figured with my connections and inside info, how could I go wrong.

What to do, what to do. Who should I bet on? After all, I've seen every game each team has played. I must have a pretty good handle on which way it might go. So I decided to sit down and really give this some thought. That can be a problem sometimes. As a few of you have pointed out, sometimes I have a problem staying on topic. That may be true but I still think, if ya don't use the waterproof sheet-rock to begin with, why bother doing it in the first place?! Am I right?

Back to the game. If I'm gonna wager on it, it might be wise to seek the advice of people in the know. Well, who better to guide me than Outsport's own Olympic hockey prognosticator, Minnesota Mikey. I mean, he had already posted the what-not's and where-fores on this tournament. If there's one guy who's gonna know the score, it'll be Mikey. So I looked up his fearless predictions. Not much there, unfortunately. True, he does say what I like to hear, in that Canada's gonna win gold but there's not really anything on today's big game specifically. A little more digging was needed. ...

So, off I went, in search of this hockey genius, looking for the wisdom I knew he possessed. I found exactly what I was looking for on his blog. Yup, there it was, the information that was gonna win me some green. Boy, oh boy, was I excited. That is, until I read what the boy had to say.

Minnesota Mikey was telling me the U.S. was gonna win but if they didn't, he HOPED Canada does. WTF? Exactly how many teams are in "The Big Game?" I wasn't any further along than before I started. Here's the Outsports Olympic Hockey Guru predicting the Americans would win, but if not, maybe Canada would! Huh? OK, he wants the US to win. Got it. But if they don't, he hopes Canada does. Oh boy. ...

So, thanks to the Minnesota Public School System, things are looking bleak. Who's gonna win the big game? I still didn't know. Now I'm getting antsy. Sure, it's not anywhere near 7:30 but still, this is getting serious. Something radical needed to be done. Outsports was no help. The State of Minnesota and at least one of its residents didn't seem to wanna help. There's gotta be a better way.

Then it hit me. I need a Canadian. Yes! Why didn't I think of this sooner? Doh! The answer to my problem was right here. On my turf. All I had to do was hitch up the dog team and I could finally relax, find the answers I was looking for. Enjoy Super Sunday. Yes! Forget Minnesota Mikey. All it took was a quick trip across the prairies and I've got Manitoba Marvin! Buddy, good to see ya!

Marv was very helpful, as he always is. He pointed out something I had overlooked. How did I swallow all the hype? How could I be so stupid? This wasn't "The Big Game." This wasn't really important at all. They're not playing for "All the Marbles," this is only a preliminary match up in the preliminary pound. You know what preliminary means? It means it happens before the liminaries! What the hell was I getting so worked up for? Nobody's going home if they lose. As a matter of fact, save for maybe a little tougher road to gold, losing this game is not the end of the world in the least. Wow! Whadda relief. Thanks Manitoba Marvin. Yea, I thought Tiger finding Buddha was a stroke of genius too. Yea, people will buy it. They always do. See ya, Manitoba Marvin and thanks again.

In case you're wondering, Manitoba Marvin told me he's picking Canada to win. But if they don't, he hopes the Americans can squeak it out. Now, what time is it?