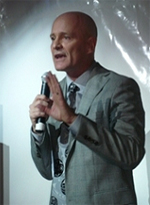 It seems the president and CEO of the Vancouver Olympics, Philip Steenkamp, is a gay man. From an OutQ News report of an Olympic reception for gays in Vancouver:

The speaker was none other than Philip Steenkamp, president and CEO of the 2010 Olympic and Paralympic games.

Steenkamp began his remarks by thanking his partner, saying, "He is a true Olympic widow. I really want to thank him for all the support that he's given me."

No wonder Pride House got so many resources and access; It all makes lots of sense now.

Pride House. Lesbian gold medalist. Johnny Weir. And now this. Does it make these Games the gayest ever?