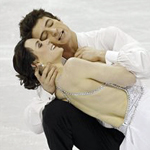 When Charlie White, and Scott Moir were 8 years old, they got into a fight during a hockey match. White played for a Michigan team, Moir for an Ontario team. I don't think either of them would have guessed that a decade later, they would be world class ice dancers, training at the same facility, being taught by the same two coaches, become best friends, or they would be fighting out for ice dance gold. But history has just been made.

After a discipline that has been dominated by European countries, North America has just proven its dominance in the New Era, with Canada and the U.S. finishing 1-2 following the free skate.

Tessa Virtue, 20, and Scott Moir, 22, were put together by Scott's aunt Carol when Tessa was 7 and Scott was 10. Scott would eventually give up hockey, and at 12 Tessa turned down a spot at the National Ballet of Canada,; they did so because they wanted to be together and they had become best friends. Tonight, they can celebrate all of that hard work by becoming the youngest Olympic ice dance champions, and the first Canadians to win ice dance gold. Their performance was by far the most compelling tonight.

Americans Meryl Davis, and Charlie White came into this event as favorites for gold. They defeated the Canadians at the Grande Prix Final, but tonight the pressure seemed to be too much. Not skating as free as they had in the past, they took a 1-point deduction on a lift for it being held too long. Nonetheless, they won the silver and became the third American dance team to medal at the Olympics.

Oksana Domnina and Maxim Shabalin of Russia, came in as defending world champions. But they also came in with a lot drama about their original dance, as aboriginal rights groups screamed foul over their costuming choices. This week, the Russians did not do anything that resembled how world champions danced. They lacked speed, unison and their programs got a cold reception by the entire crowd. They did however hold on for a bronze medal. The last time the Russians lost the Olympic Gold was in 2002.

Americans Tanith Belbin and Ben Agosto came in as defending Olympic silver medalists, but did not make the podium. If there is one thing I can say about their performances this week is that they lacked the passion that they had in the past.