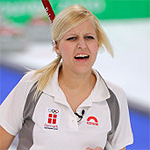 Things keep getting worse for Canada. From a snoozer opening ceremony to malfunctions to poor athletic showings, people in Vancouver are referring to these as the Glitch Games. Add to that poor sportsmanship by Canadian fans, and you've got a growing P.R. problem for the country:

A Danish curler was brought to tears after a boisterous Canadian crowd intentionally distracted her during crucial shots in her team's match against the home nation. With the crowd stomping and making deafening noise, Denmark skip Madeleine Dupont missed two potentially game-winning shots and tearfully blamed the fans for it afterward. Canada won the match 5-4 in an extra end.

Such boorish fan behavior is normally considered unacceptable in the genteel world of curling.

I like Canada. I grew up liking Canada and Canadians (except for the occasional rude Quebecois on vacation in my hometown). But even the Canadian curling team was disgusted by this display of their fans (and forget the fact that they had to go to extra ends to beat Denmark). I hope the Canadians can turn something around; They're running out of time.