Share All sharing options for: Kim Yuna, Joannie Rochette shine on the ice 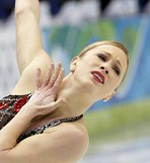 The ladies figure skating short program tonight was probably the best event in the Olympics. The final two flights were full of talent, and grace. But for the top six, they pretty much will hold onto their positions providing they stay on their feet.

In a field where most us of thought placements would be mere tenths of a point, in fact turned into full-point separations among the top three.

There were some surprises, and some not so big surprises. And the night belonged to Joannie Rochette (photo).

Lets talk about the American girls, Rachael Flatt and Mirai Nagasu. They are sitting in fifth and sixth respectively, which is about as good as could be expected. While Flatt has not yet reached the artistic talents of this field, Nagasu has not reach her technical position. Flatt looked like she skated the best short program she had all year with a cleanly landed triple flip/triple toe combination; she had an uncharacteristic shaky landing on her triple lutz, which left her with a deduction on her GOE of 1.0.

Nagasu under-rotated her triple lutz and received a deduction of 1.20 on GOE. The Americans should be proud; many said they would be not be in the coveted final warm-up group. But getting onto that podim will most likely not happen. Both should look to be front-runners in 2014.

Miki Ando of Japan must be kicking herself. She had a choice to make -- to either skate completely clean, or take a risk that has not worked out for her once this year. Tonight, her scheduled combination was a triple lutz/double loop, but she tried to put a triple loop on the end. She under-rotated the jump, and had a bad landing. Now she's sitting out of third place by more then 5 points. She'll have to have the performance of life Thursday night to medal. It's too bad that after such a strong Grande Prix season, she literally gave up any chance of becoming Olympic champion.

Mao Asada of Japan learned a valuable lesson -- one jump, regardless of how impressive it is to land, will not put you in first place, nor will it win you Olympic gold. Asada thought this whole year that if she landed a triple axel combination in her short program, she would reign supreme. But she forgot about the other stuff, like artistry and grace. This time, she took no deductions in the short, and yet came in second.

Kim Yuna of South Korea skated after Asada. Skating to a cute little "Bond Girl" number, Kim vaulted into a triple lutz/triple toe combination that put the men to shame. She covered so much ice, with so much speed, she commanded the audience and the judges, long enough for them to watch her do an equally impressive triple flip. There was not one arm movement that didn't belong; every step was so refined, and her spins were faster then they have been in the past. Tonight she broke her own world record in the short program, and leads the field by more than points. The gold is hers to lose.

I'm saving the best for last. Mao landed a triple axel and Yuna posted a new world record. But the night belonged to Canadian Joannie Rochette. Skating for the first time without her mother in the stands, who she lost just three days ago, she had the best short program she had all year, and for that she's in third.

Rochette was expected to contend for a medal in these games, but many wondered whether she would even skate after the loss of her mom. Finishing her program with a beautiful combination spin, she ended the program in tears, and rightfully so. She has just defined was an athlete is, and what the Olympics are about. She won for herself tonight, and that's what really matters.