Share All sharing options for: Canada crushes Russia in hockey, 7-3 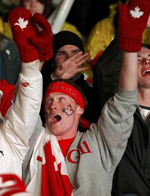 Maybe losing to the U.S. was the best thing to happen to Team Canada. Beating Germany, 8-2, in a play-in game was one thing, but routing Russia, 7-3, was truly impressive. Canada scored early and often, leading 4-1 after a period. It was so lopsided, I switched to NBC showing taped women's skiing. (A Canadian gloats about the game below).

Canada looks like the best team in the tourney right now, though anything can happen in a single-elimination tourney. The U.S. moved on to the semis, but struggled in a 2-0 win over Switzerland. The Swiss also took Canada to a shootout, so they are a tough out. In the semis, Canada plays Slovakia, while the U.S. gets Finland.

Former Canadian skater Chad Conley (who's been writing skating for Outsports) texted me from the Russia-Canada game and said he was leaving with 10 minutes gone in the first since it was too loud. Funny -- there were a lot of Canadians who wish they could be in the arena and Chad's bailing early. Well, not every Canadian is a huge hockey fan.

I have really enjoyed NBC's hockey coverage, mainly announcer Mike "Doc" Emrick, who might be the best play-by-play guy going in any sport. He has just the right inflection on goals and is amazing in being able to not screw up the hodgepodge of names. His analyst, Ed Olczyk, is also good, and has a way of inventing words. His calling the U.S.-Canada game "tremendously tremendous" became an instant Internet hit. And he was at it again during the U.S.-Swiss game, saying, "There is one word to describe Zach Parise -- persistancy."

Jimmy D, who's been filling us in on the Canadian Olympic obsession, filed this: 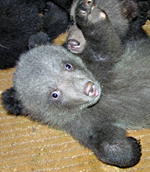 Yes, it was 4-1 after one. 7-3 after two, and the third period was played solely for the benefit of 33 million Canadians and anybody else who likes good, mean hockey. When it was all said n done, yes the Russians were. Done that is. Done for the 2010 Winter Olympic Hockey Tournament. Was the game even close? No, sorry it wasn't. Don't the Russians have the best player in the world. Yea, I guess you could probably say that, but hockey is a team sport and Alex Ovechkin was Alex Invisible.

As I proudly said to a fellow hockey nut just prior to puck drop, here comes a life lesson -- never corner a Canadian hockey team. They bite like rabid beavers - and boy, did they bite. They bit hard, they bit often and the end result was a gnarled Russian bear carcass.

Can you imagine the salivating going on at NBC? Canada against the USA in the final? Ratings would leave the stratosphere. Oh Canada! Russian bear for dinner, perhaps American Pie for dessert? We can only hope!