Kim Yuna golden on a night of superlatives

Share All sharing options for: Kim Yuna golden on a night of superlatives 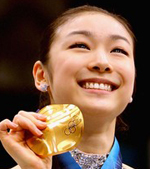 The ladies figure skating final tonight was the truly the show of shows. We watched a former world medalist crumble, another move up, one skater who made history, another who had to overcome gut-wrenching grief and the crowing of a new queen.

This was the first final I have had the opportunity to attend at these Games, and let me tell you, talk about an emotional high.

Lets start with the American girls.

Rachael Flatt was in fifth after the short program, and although she stayed on her feet, her consistency with jumps needs to be combined with artistry in a field with this kind of depth. She dropped to seventh.

Mirai Nagusu, the second American on the team, did something she hadn't be able to do all year -- skate a program with no downgrades and put on a show. She skated to a personal-best score of 126.39, that moved her up from sixth to fourth. Both skaters should be proud of their accomplishments, as the world knew that the American ladies team did not have a medal favorite.

Miki Ando of Japan, the 2007 World Champion, was expected to contend for this podium. On the Grande Prix circuit this year she won two events, and finished second at the Ggrande Prix final. But tonight, from where I was sitting, it looked like she was looking for directions throughout her program. Earlier today in practice, I saw her making changes to her program. The day of the event is not the time to make changes. She looked slow and labored throughout her performance, and her usual springy jumps were short of rotation, and her footwork was disastrous. She can be happy, though, with her fifth-place finish, much improved after placing 16th in Torino in 2006.

Mao Asada made history, becoming the first woman to land two triple axels at the Olympics. But her program skated to the "Bells of Moscow" was a disappointment overall. Asada was on her way to possibly challenging Kim Yuna for the gold with those triple axels alone, but halfway through her program a series of missteps took any chance of that away. She fell short of rotation on her second triple flip, and then mere seconds later tripped into a triple toe, which resulted in her doing a single. Her footwork was so overly difficult it went by at the speed of a snail. At the end her face showed the story, she knew she had not done enough to overtake Kim and settled for the silver.

Kim Yuna showed up at these Games with everything going for her, yet facing enormous pressure to win. In her country of Korea, she's not just an athlete, she's a mega-celebrity. Tonight, that celebrity status will probably add to the accumulated millions she's already banked.

She opened up her classical routine with her signature triple lutz-triple toe combination that was not as spectacular as it was in the short program. She then proceeded to check off a list of spins, footwork, and two more combinations. To watch a woman go into a double axel-triple toe combination from a spread eagle pretty much sealed the deal for me. There was not one misstep, miscue or wobble. Her score of 150.06 broke her own world record for the long program. She handed Asada a crushing defeat by more than 23 points. For the first time since 1992, the woman in first after the short program won the gold.

Joannie Rochette gave her mother what she had always dreamed her daughter would do -- make an Olympic podium. Her skate tonight was not without minor errors; there was a fallout on a triple flip and over-rotating a double axel. But considering what Rochette has had to go through this week, just to get a medal is amazing.

There was not a dry eye among those of us in the stands who know her and have met her mom. Therese is probably jumping up and down in heaven -- her only child has fulfilled a childhood dream. That bronze medal makes Rochette the fifth Canadian woman to win an Olympic medal, ending a 22-year drought. It was quite a night.