So, I asked our Canadian correspondent Jimmy D. and Hockey Kid in Minnesota, Mikey, to write a point-counterpoint to the gold medal U.S.-Canada hockey game. Jimmy was game, but Mikey unfortunately was too busy. So then I asked Jimmy to write as if he was interviewing Mikey.

He obliged, but I told him what he sent might have too many inside jokes (he and Mikey are friends in addition to being fellow hockey players), and that only those familiar with Mikey's blog would get some of the references. Jimmy then sent me about a dozen messages badgering me to change my mind (or more like "beavering" me, him being Canadian), so I figured I would relent for Jimmy's many fans. The photos below are an artist's rendering of Jimmy and Mikey.

Jimmy is playing all three parts, kind of like in the Navy when they do plays and a guy performs the male and female roles (only with no beavers or moose).

The Grudge Match for Gold

... And on the sixteenth day, God created Hockey!

That's a wrap, boys n girls. The Vancouver Winter Olympic Games have run their course. All has pretty much been decided. There is really only one thing of consequence left: Who's gonna be your 2010 Olympic Hockey Champions: Host & perennial powerhouse Canada or the young, upstart USA! USA! USA!

In our continuing commitment to provide our dear readers with the most concise, in-depth analysis of the big game - The Grudge Match for Gold - Outsports has asked resident hockey expert Minnesota Mikey to offer his insight and wisdom, prior to this epic battle. In a veiled attempt to seem impartial, we've also brought in some Canadian dude...

Outsports: So, Minnesota Mikey, welcome back to Outsports. For those of our readers who may not be familiar with your background, tell us a little about yourself: 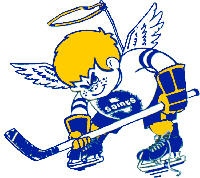 MM: Well, I'm a high school senior. I play varsity hockey and plan to go onto a D1 college next year. I live in the burbs outside of Minneapolis n basically jus eat, sleep n breath hockey. Oh n eat. Yea, I like food, I like to eat. I do pretty darn well in school n I've got several big colleges recruiting me. Oh, and I like to eat. I also write a blog. I started it late last year, with the hope of lettin other kids out there know they're not alone. I thought I was. Ya know, a gay, high school jock. I didn't think there was anybody else like me. Man, was I wrong. I get tons of emails from kids my age or younger, from older guys too, lettin me know what they went through. So yea, it's kinda cool. I jus wanna help any kid out there n let them know they aren't alone. Give them some advice if I can. Oh, n I like to eat...

OS: Thanks Mikey. You really are making a difference. I want you to know that. A huge difference to all those kids. And you there, who are you?

OS: OK then. We've brought you guys here to bring our reader's up to speed on the Gold Medal Hockey Final. Why not begin with an overview then maybe we can get into specifics. Mikey, you start.

MM: OK, well I think the US has been the most consistent team throughout the tournament. They're young, they're hungry and they seem fearless. They've got gifted forwards like Zach Parise, Patrick Kane, Bobby Allen, Phil Kessel, I could go on. The two Johnsons, Erik n Jack on defence with Brian Rafalski. I think their biggest asset though, is in the net. Yea, Ryan Miller's probably the best goalie in the world right now. And don't forget the man at the top. This is Brian Burke's team and Burkie's instilled this attitude in his player's. They don't seem to feel pressure. Not like Canada does anyway. He's got them convinced to just go out and play and have fun. They're loose, like they've got nothing to lose, n oh yea, I like to eat...

OS: Foods important to you isn't it Mikey. Canada you're up. What say you? What's wrong? 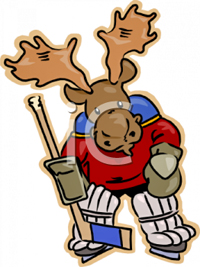 HC: Um, oh nothin. I've jus never seen a kid eat chicken wings like that before. Like, won't he choke eatin the bones too?!? Forget it. Never mind, but man! What's that like two, three dozen n we've only been sitting here like ten minutes...Um yea Canada will win...Look, let's face it, Canada is hockey. Did you see that game last week? Sure, the American's won but it was still total domination by our guys. Nobody's been able to coral Rick Nash. Ryan Getzlaf, Corey Perry, Jerome Iginla, Eric Staal, even Brenden Morrow has been unstoppable. Don't forget, we've also got Sidney Crosby who's due. And Jonathan Toews has probably been the best player in the tournament from any country and by far the cutest! Our defence is incredible with the younger guys leading the way. Drew Doughty and Dan Boyle. Duncan Keith is scorin and man can Shea Weber fire a puck! We're just a better team, pure n simple! I could go on but I think Mikey just ate his hand...

OS: Yea, don't worry bout him, we're bringing more wings...So what else guys? What are the intangibles. The hidden strengths or weaknesses the other team can gain an advantage with or exploit? Mikey?

MM: Yea, Food! Well, I don't like repeatin myself. That takes away from eatin but the Americans got youth and they aren't suppose to win. I mean look at Team Canada. Their total salaries combined, equal like 127 Million. Fifteen of their players are tops in the league statistically. They're at home. There's really no way they should lose, so that's why they will. Plus, we owe them from 2002. They beat us at home. We gotta return the favour. WINGS!

OS: Canada? What do you say to that?

HC: OW! HE JUST BIT ME! Jeez, what's with this kid? I've never seen hands work so fast. Shouldn't he be medically checked or somethin?!? He's gotta have a tape worm! Ahm, yea, Canada will win. Look I agree with everything the garburator said, only in reverse. All those things will work in our favour not theirs. Plus, we owe them for what they did to our Junior team at Christmas. You guys beat us at home while we were goin for six consecutive Golds. Were not gonna let that happen again. Come On! Take a breath! Mikey! You're turning blue!

OS: No, no, that's pie. So what else? What about the coaches? How do they factor in? Mikey?

MM: *smack*, *gobble* *snort* *chew* Huh? Oh um, Ron Wilson. Yea good coach. A player's guy but with an edge to him. Basically an extension of Burkie. They've worked together for a long time. They know each other and the players seem to respond. John Tortorella's the other coach. I think he might be crazy. But crazy good, ya know? Or maybe jus crazy...I dunno. PIE!

OS: Canada? Maybe you should come over n sit by me. I don't like the way Mikey's eyeing ya and we just can't afford the liability. Plus, what if he tries to take another chunk outta ya?

HC: AH HA! YES! So you admit it! He did try n bite me before! Seriously, this dude's whack - but in a bad way! Coaches, yea, Canada will win. Um Mike Babcock. Intense. No nonsense. Even guys like Jerome Iginla have said they're a lil afraid of him. Yea, Babs, he's won Cups in Detroit and he's surrounded by a great supportin cast. There's Jacque Lemaire. Cup winner. Ken Hitchcock. Cup winner. Actually, I'd like to see Mikey n Ken Hitchcock go toe-to-toe at the dinner table. That might be more entertaining then the game! Um yea, Canada will win.

OS: All right guys, well done. I wanna thank ya both for coming. But before you go, I'd like to hear your predictions and why those predictions will come true. Mikey?

MM: Does eating salad make me seem gay? No, seriously, I need to know! I like salad but like the football team at school looks at me funny every time I go n load up on the leafy greens. Oh, n I like food. What was the question? Oh yea, um I think the US will win, like 3-2. They're loose, they're ready, um *chomp* *rip* *growl* hmmm *smack* *snort* *cough* *aaack* Gaaa! WHAT. WAS. THAT?!? YUK! *P-tew*