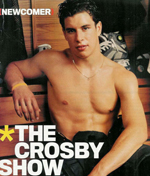 Congratulations to Team Canada for its stirring, pulsating, dramatic 3-2 overtime win over the U.S. to win the Olympic hockey gold. The game winner was scored by Sidney Crosby, who beat the superb Ryan Miller in goal. It was hockey at its best.

I had no real rooting interest, but was glad when the U.S. tied it with 24.4 seconds left in regulation on a goal by Zach Parise. It meant the game would go into OT. I imagine Canadians everywhere went into shock on Parise's goal.

Despite giving up the game-winner, Miller was clearly the best goalie in the game. If not for Miller, Canada would have won 6-1. In contrast, Canadian goalie Roberto Luongo was shaky and prone to dropping the puck from his glove like a butter-fingered wide receiver. In consecutive games, he almost blew leads of 3-0 (vs. Slovakia) and 2-0 (vs. the U.S.). He was lucky he had the better team in front of him. Miller was named the tournament MVP, deservedly.

This game meant so much to Canada, so I am glad for them. I even got caught up in everyone singing "Oh, Canada" at the medal ceremony. And watching each of the players on both teams get their medals was seeing one hottie after another. In contrast, hockey is clearly a step-child sport in the U.S., so a win would have been nice, but not really that big of a deal nationally (the 1980 "Miracle On Ice" meant something because of the geo-politics of the time).

SI's Luke Winn, sitting the the stands, took this cool shot during the awards ceremony: 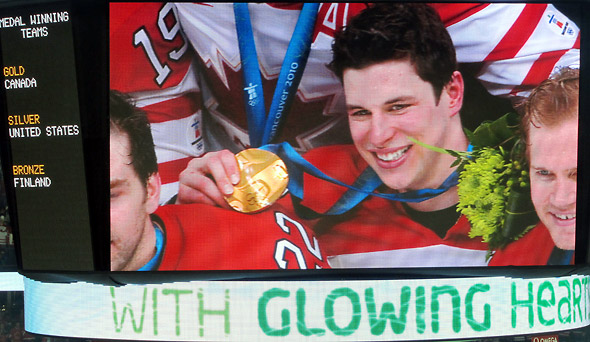