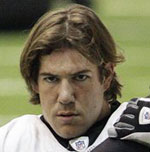 In my Super Bowl for the Clueless column, I wrote about New Orleans Saints linebacker Scott Fujita, an outspoken advocate of gay rights, including marriage. Fujita, a Cal Berkeley grad, is very passionate about social issues and at Super Bowl media day, he did not back down from his views, addressing gay rights and also Tim Tebow's Super Bowl ad.

"It's just me standing up for equal rights," Fujita said. "It's not that courageous to have an opinion if you think it's the right thing and you believe it wholeheartedly. ... There is a certain stigma that comes with being from Berkeley. And I'm proud of that stigma."

Fujita, married with two children, said he gets some gentle ribbing from Saints teammates for his outspoken views. He thinks that players are more gay-tolerant that people believe.

"By and large, the players are more tolerant than they get credit for," he said. "It's not a big issue. Some guys will think you are crazy for believing one way, but they'll still accept you."

The linebacker also addressed the controversy over CBS rejecting a purported ad by the fledgling gay dating service Mancrunch, saying the company had a right to air the ad even though it might offend some.

Fujita, who was adopted by a Japanese-American father and Caucasian mother, is on the other side of the abortion issue than Tebow, who will be part of a pro-life Super Bowl ad.

Fujita said he respected Tebow for standing up for what he believed in. "The idea of focusing on the family - who wouldn't agree with that?" Fujita said. "But the means of doing so, he and I might not see eye to eye all the way."

A writer friend of mine clued me in to Fujita a few years ago as someone being unusually social conscious for a jock, and I have been a fan since. His statements on the media stage at the Super Bowl reaffirmed that.