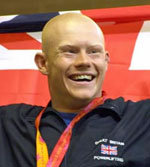 Chris Morgan, who has won gold medals at the Gay Games in Powerlifting, has won the "Best Lifter" award at the British Deadlift Championships. Outsports has featured articles in the past about Morgan, known as Chunky.

He was lifting in the British drug-free single-lift championships, held in Horncastle, England, and made lifts of 462 pounds followed by 528 pounds and then 572 pounds to clinch the British Open title in the 181.5-pound class and also win the overall best lifter in proportion to body weight.

I'm really pleased to have set a new lifetime best on the way to winning the overall best lifter title at this year's British Championship. This competition forms part of my preparations for the forthcoming defense of my world title in Russia. I'm realistic that the trip to Moscow will be the toughest test of my whole career to date, however this result gives me encouragement and incentive to improve again over the coming weeks.