Share All sharing options for: Sports honored at GLAAD Awards 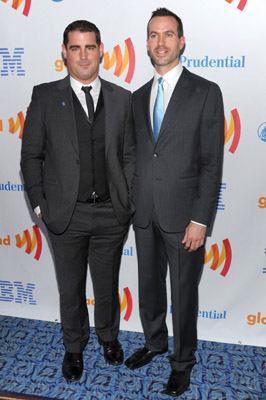 Outsports was well-represented at the GLAAD Awards in New York City Saturday night. While we didn't win in the Outstanding Digital Journalism category in which we were nominated, we were very proud to be nominated with in such a strong category (with so many other sports-focused articles). Not only did we not win, we didn't finish second either: It was a tie for first. Everyone expected John Buccigross' article about Brendan Burke to win, and an article over at AfterElton (that also highlighted the sports world) also won.

But the evening wasn't about whether we won or lost, and it was a lot of fun (even if the ceremony was a little long). I don't know why it's still amazing to me that so many people know about Outsports, but it's great to see so many faces recognize our community here and the hard work that all of our contributors -- writers and readers -- put in.

Some photos and personal thoughts about the event after the jump.

After the ceremony I chased down Sigourney Weaver (a fellow Stanford alum) to ask her how she got Stanford all over Avatar (as far as I know, it's the only brand name in the entire movie). She said she thought it was James Cameron's idea, and he thought it was hers. She accepted an award for her moving work in Prayers For Bobby.

I also got to chat with LZ Granderson (who brought his son to the ceremony, which was cool) and his rep, the indomitable Shelly Weiss. LZ was also nominated and had the same feeling I did: Buccigross would deservedly win the award.

I ran into Scott Evans, who plays in the New York Gay Football League and whose character on One Life to Live was recently cut. He's moving on to other projects now, auditioning in Los Angeles as I write this.

The talk of the night may have been Ronnie Kroell, whose tailormade suite was a show-stopper. He's a super nice guy and incredibly handsome.

Best speech of the night was by 11-year-old Will Phillips, the kid from Arkansas who won't say the Pledge of Allegiance until gays can marry. He ended the speech with a quote from one of his favorite philosophers: "Live long and prosper." I'm not kidding.

On top of it all, Brian Sims and Larry Felzer were there to share the evening. These two are why we continue to put so much effort into Outsports: In different ways they are both incredible advocates for gay equality in sports. Having people like Brian and Larry as part of our community is better than any award we could possibly win. Sounds like a corny line, but it's true.

More pics from the event at GLAAD.org.