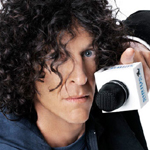 Since Artie Lange took a leave of absence from The Howard Stern Show, Howard has been better than ever. And the latest is a doozy. He's been talking about this for weeks, and finally the Tiger Woods Mistress Beauty Pageant is just around the corner; Already many in the media are launching their predictable "holier-than-thou" attacks on him. They reportedly have four of Woods' mistresses participating and the prize is $100k, donated by the straight "cheating" Web site AshleyMadison.com (the people who brought us Mancrunch.com, of Super Bowl infamy), who claim to have 5.5 million members.

Reports are claiming that Stern invited Tiger Woods' wife, Elin Nordegren, to be a judge; But if the idiot reporting that did his homework, he'd realize that never happened (Howard just mentioned it on-air once as a possible goof). Oh, and Baba Booey.