NFL Combine, aka, the Underwear Olympics

Share All sharing options for: NFL Combine, aka, the Underwear Olympics 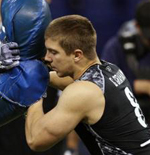 The NFL is holding its annual rookie Combine in Indianapolis, a flesh-fest where prospective draftees are tested, poked and prodded to see if they have what it takes to play in the league. Mike Florio of Pro Football Talk has dubbed it the "Underwear Olympics," though don't expect to see any of the players in their underwear.

The NFL Network, which shows pretty much every aspect of the workouts (the bench press is quite popular), won't show guys being weighed in their underwear; they say it makes the players uncomfortable. Maybe they're still freaked by the sight of Tom Brady from 2000, looking more like an algebra student than a future Super Bowl winner.

But it hasn't stopped scouts from asking about underwear choices.

"Someone asked me if I wore a g-string or a jock strap when I played," McCoy told the NFL Network set Monday to disbelief, laughter, and amazement.

Analyst Mike Mayock wanted to know McCoy's reaction to the question. The affable defender just left his mouth open in a stunned expression.

The Combine is an odd event and shows how much minutiae fans want from the NFL. People obsess over times in the 40-yard dash and how many reps a guy can bench press 225 pounds. None of this really tells much about how a player will perform on Sunday, but it's a way to kill time prior to the draft.

On the other hand, it is a chance to see future NFL players running around in tight athletic gear. And the Combine gets a ton of attention NFL.com, complete with videos and photos. But no underwear.